Hunt the bots. Avoid the carbons. Stay alive.
The world has become dangerous. Her blood makes it worse.
One girl. Two worlds. Hunted in both.
Love futuristic YA thrillers? You'll love the SHADOW AND LIGHT series

Like the rest of the world, we have watched with dismay the events unfolding in Ukraine in recent days. Our hearts go out to the many millions of Ukrainians as they suffer and fight for their freedom against one of the most powerful militaries the world has ever seen.

While recognising that we are a very small organisation with little influence, we condemn the actions of the Russian government in invading a peaceful and free country in pursuit of geopolitical aims and call on them to withdraw their military immediately. And we call upon the countries of the West to do more to support the freedom-loving Ukrainian people.

We echo the words of European publishers’ organisations, ‘… we send words of solidarity to the people of Ukraine: you are part of an international community that supports human dignity, democratic participation and equality for all. You have a right to peace.’

Whether you like science fiction, dystopian, fantasy, paranormal, or more, our fiction book series’ for young adults will leave you wanting more.

The earth is dead. A sphere of ice, unmoving, shrouded in fog. A third of the population gone.

With no power and wolves prowling the surrounding dead forests, the inhabitants of the small village of Milton are losing hope. But then a mysterious train arrives. A train with a one-way ticket for Flint. Why her? Where is it going? No-one knows. But she needs answers so she climbs aboard.

Taken to a secret location, she’s placed with other talented teenagers from around the world and they begin their training. What for? They know they’re being lied to, but discovering the truth is more dangerous than Flint can imagine.

They’ll have to board another train. But this journey might just be their last.

Knowledge is power. Knowing it, could save you … or kill you.

Year 2149 in the Women’s Republic of Anglia and in the Academy, Clara Perdue is training to become a Truth Sister, a privileged position allowing her to maintain the new order of social purity. Men broke the world as it was, caused the changes in the climate that brought so much pain. Only women can bring order to the chaos and Clara wants more than anything to help bring it about.

But when she stumbles upon information that the Republic has tried to suppress, questions surface. Will she bow down to the institution she was raised to believe in and grew to love, or will she risk everything for her family? 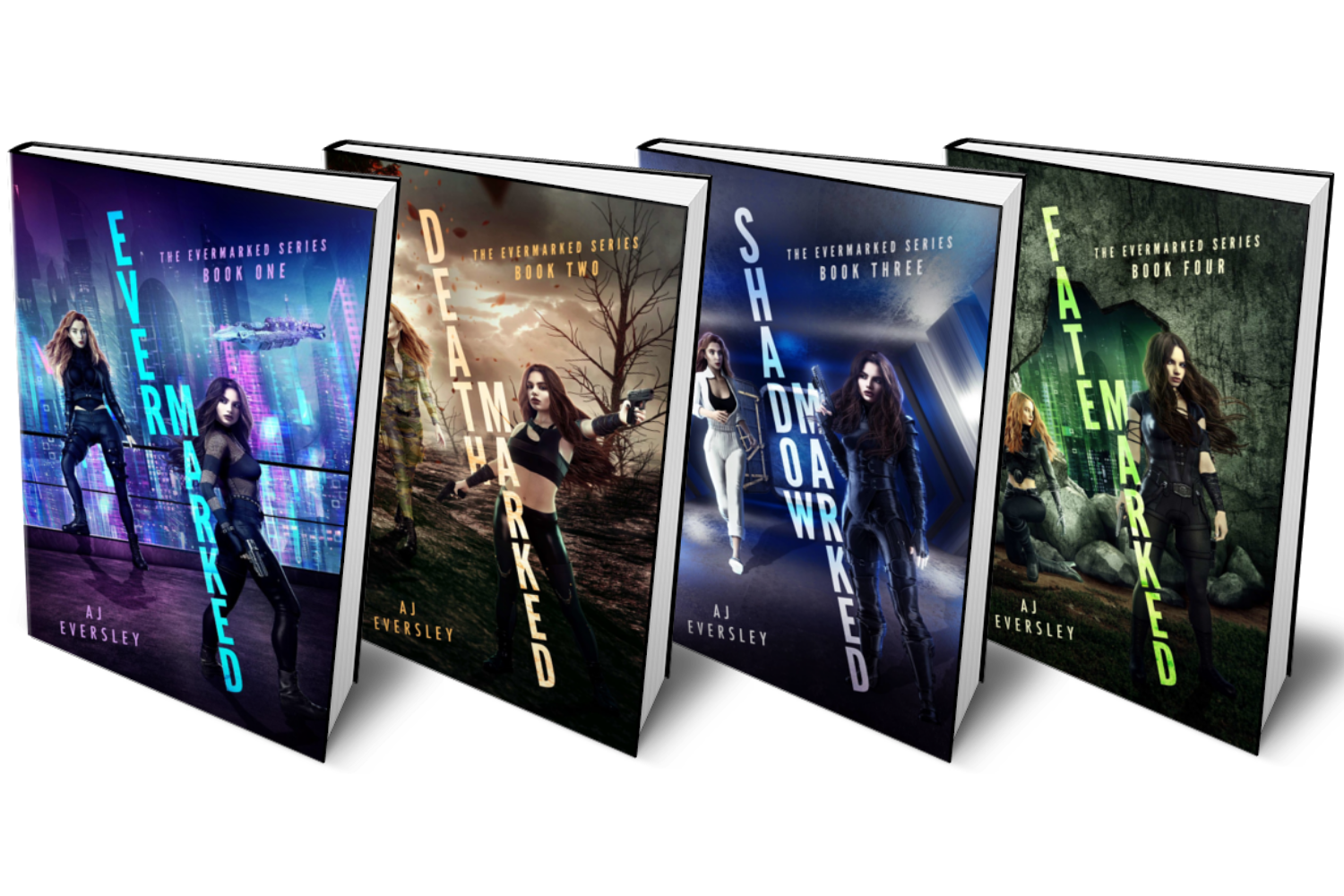 The EverMarked series, by AJ Eversley

Marked. Hidden. Trained. But the terror awaiting is greater than any of them can imagine.

Sienna has spent her entire life inside the DEZ, a glorified orphanage for unwanted Marked kids. Finally, she’s only months away from graduation. For over a year she’s worked hard to prepare for life outside the DEZ, but being the arena’s champion isn’t always an easy task…even for the notorious Blaze. Fighting in the Underground isn’t about the thrill or the glory, though Sienna has achieved both, it’s about the money—and a way out. 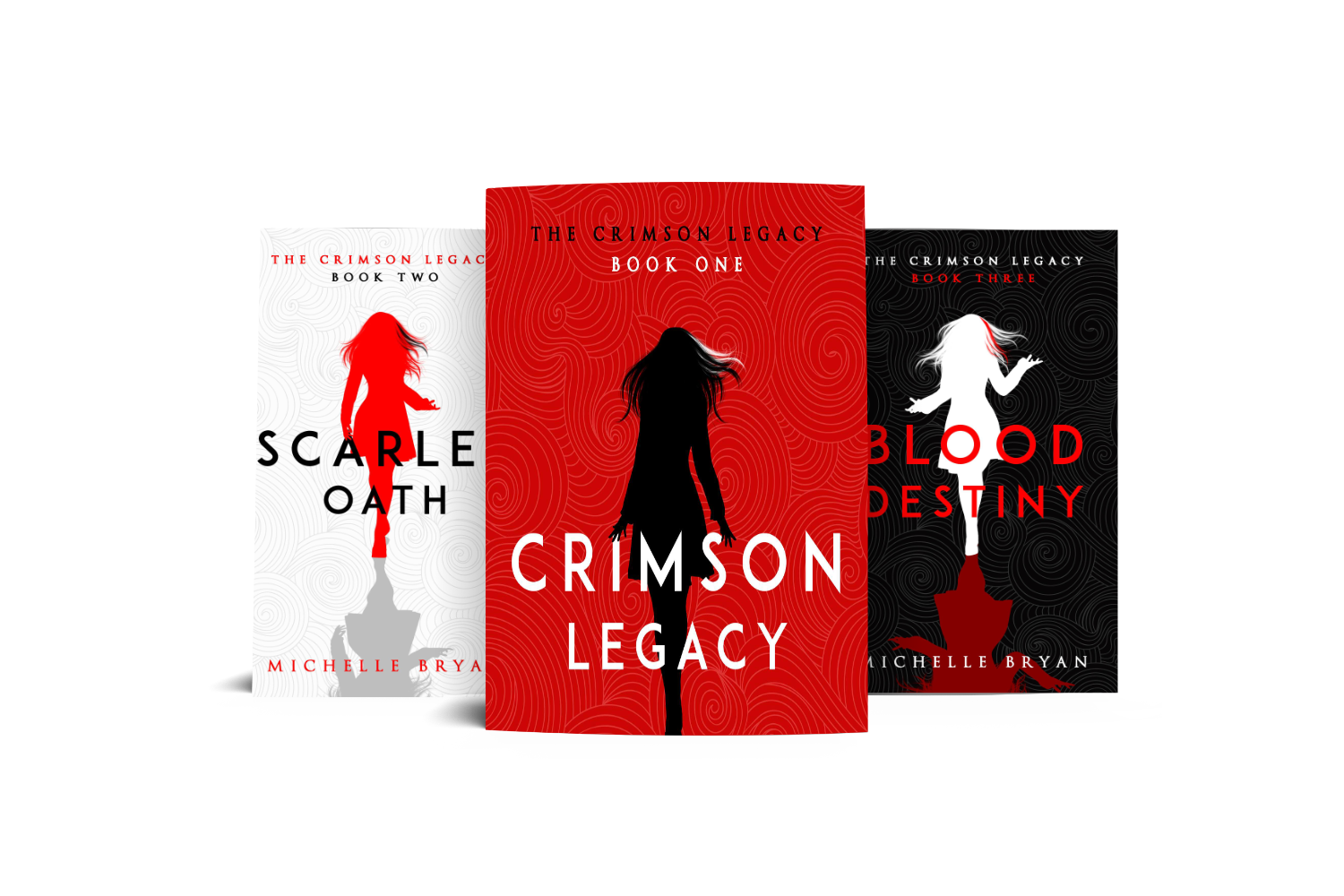 Sometimes an inheritance can be a curse.

Now she’s chasing shadows—a cryptic message to find someone she’s never heard of in a town she’s never visited. But strange things is what Tara will find. Things she can’t explain. People will fear her. Others will want her caught. Powerful people.

Blood. Her blood. That’s what they want. And they’ll do anything to get it. 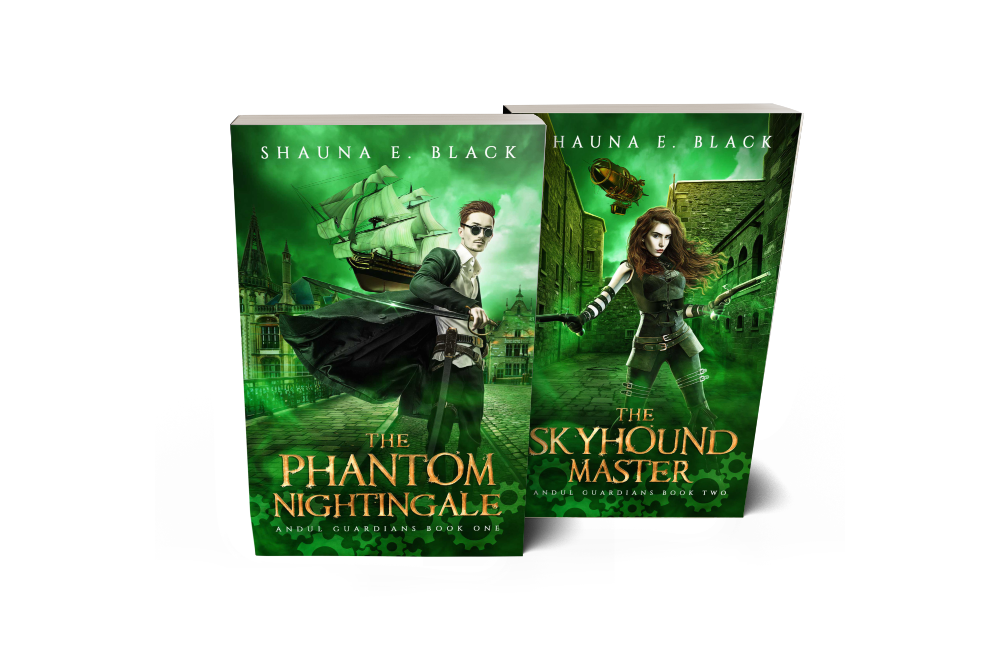 The Phantom Nightingale, The Skyhound Master, and The Insurgent Martyr

This time, a magic voice won’t be enough to save him.

Xanthe’s crew might all be kids, but that doesn’t mean he plays it safe. He saved them all once, and now they’ll go anywhere with him. But when news of a potential lost sister comes to light, Xanthe will lead them on their most dangerous mission yet – into the heart of the empire that wants him dead or alive.

Avilene’s plans after graduating from the empire’s most prestigious academy include escaping the overbearing academy director that has dictated the course of her life since childhood. They do not include being kidnapped by a renegade airship captained by the notorious Phantom Nightingale.

When their purposes clash, can Xanthe persuade Avilene to forego her duty to bring him to justice, or will he lose his crew and his freedom in a desperate attempt to heal the scars of his past?

Some secrets are too deadly to keep, some bloodlines too powerful to contain …

Reggie Lang might only be seventeen, but she’s had to grow up fast. Losing a father as a baby made things hard enough, but when her mom turned to alcohol for refuge, Reggie had to hold things together. She still does. If only she could escape it all …

When a mysterious man invades Reggie’s dreams, is it just another sign that she’s falling apart? He claims he’s her guardian – that he’s from another world. He tells her that her father’s killer is there …

… and that now an evil mage is gunning for her, destroying anything in his way.

Reggie will be pushed to her limits as she attempts a treacherous journey, struggling to adapt to a strange new world and learning to wield her powers. The Dark Mage isn’t easily evaded. He rules this world with a bloody fist. Because it’s blood he’s after—Reggie’s blood. And avoiding capture might just be the toughest thing Reggie has ever faced. 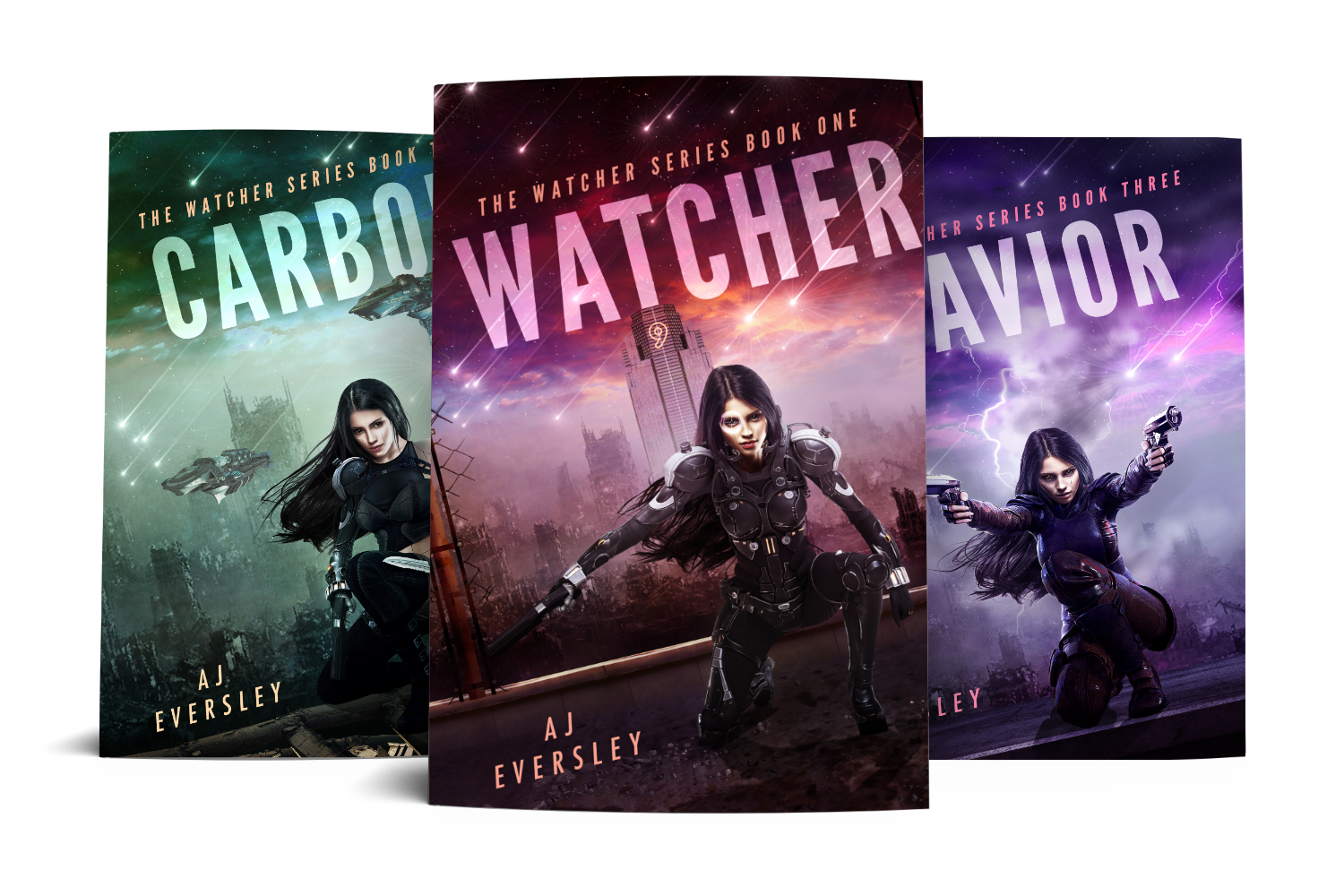 The Watcher series, by AJ Everlsey

Sawyer’s life is simple, if not easy. Her home might be in ruins, but she can protect what’s left of it.

A city destroyed by the bots—that’s home. Humans have been hunted, but Sawyer is one of a few who have turned the tables. She’s a Watcher. Taking out the bots one by one. Protecting what’s left. It’s the carbons she needs to be wary of. Faster and stronger than humans, they’re dangerous. But Sawyer’s smarter. That will keep her alive.

At least, that’s what she believed. But the carbons are evolving, and their plans are ever more cunning. Suddenly her friends are dying. Safety can no longer be taken for granted—not even for the Watchers. At least she has Kenzie. Love is a strong word, but whatever they have, it’s what keeps her going.

Embarking on a desperate mission to save humanity from extinction, Sawyer discovers that the line between friend and foe is no longer easily drawn when one of her own betrays them.

And when a horrific plan comes to fruition, Sawyer will have a choice: who to save, and who to let go. The Excelsior Journey, by George Sirois

Excelsior and Ever Upward

Put down the pen.
Pick up the sword.
Unleash the hero within.

Into Shadow and Into Light

She’s on the run. But she won’t stay hiding forever. And then they’ll wish they’d killed her, too.

When a stinging betrayal leaves her father dead, Poppy’s world comes crashing down. And when the assassins target her next, she must run.

From the life she knew. From the city she loves.

To a place more dangerous than she can imagine.

Surviving the jungled ruins of Denver won’t be easy. But if she can live long enough, she might just find some allies. And then she’ll have a chance.

To avenge her father’s death. To face those she once believed loved her.

But that won’t be easy. Because it’s not just the government that wants her dead now. Dreams and Shadows, by Jeffrey Collyer

A lonely boy seeking salvation. An evil intent on destroying him.

Living a solitary life in the local library, 18-year-old Michael is only too eager to enter a magical world where souls are sewn together and where music enchants the heart. He finally feels at home.

But deadly beasts also live here, as do hidden evils. Little does Michael know their eyes are on him. And that soon truth will become indistinguishable from lie… The Guardian’s forces may have left the forest, but they haven’t departed from Michael’s mind as he struggles to learn what his enemy will do next. Torn between feelings of guilt and love, he must now push ahead to find mythical halls deep in the earth, where secrets from the distant past are spoken of, and new riddles unearthed….